Building vital collaboration ecosystems of transformation initiatives around SDG implementation requires creating an emotionally compelling as well as strategically visible link between different initiatives, e.g. from local to global, local to national, or national to global change systems. Or, stated differently: it must be possible to connect with the larger story and see oneself contextually contributing. This does not mean to administratively coordinate efforts, but it means helping actors see the larger pattern and how they are part of a story much bigger than the individual initiative. It means creating spaces and opportunities for change systems to get into structured conversations with themselves. For SDG transformation to become more effective it is therefore increasingly important that change initiatives identify with their role within a larger transformation system, consciously operate in a distributed networked action mode, create synergistic connections across different change initiatives, and stay aware of the movement and effectiveness of the overall change system as represented by the SDGs. Four shifts are necessary for more effectively leading transformation collectively to address global challenges. 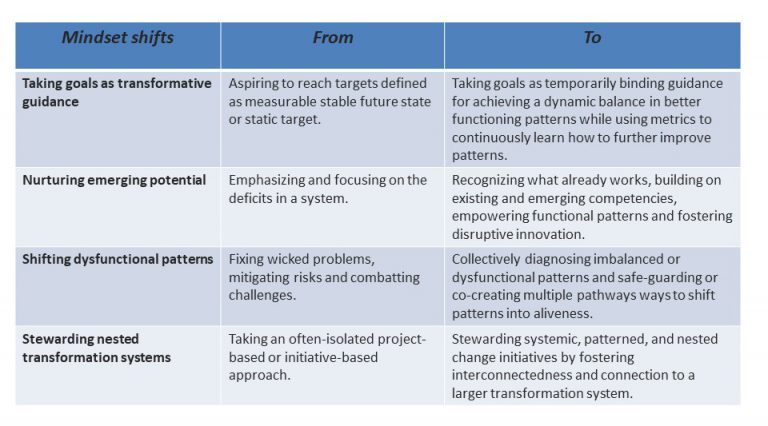 Nurturing Emerging Potential
Nurturing the collective innovation capacity of human systems requires a broad empowerment of people, at all levels of society, so that many more actors become aware of how and when patterns need to shift. Furthermore, looking for existing abilities and stewarding such existing patterns into an emerging pattern shift seems to be as important as spotting disruptive ways or shifting stuck patterns. Nurturing emerging potential as a collective leadership task requires asking the right questions and negotiating a pathway into the future collaboratively and co-evolutionarily. It means empowering actors in order to build on existing competencies, enabling them to design and enact a better future together, rather than attempting to impose change from the outside. In addition, building a collective ability could serve both, the individual (or part), and the whole – particularly, if it is guided by global transformation goals.

Stewarding sustainability transformations means empowering actors in order to build on existing competencies, enabling them to design and enact a better future together, rather than attempting to impose change from the outside.

Shifting Dysfunctional Patterns
Currently one of the most important leadership tasks is often considered to be problem solving or solution finding. However, such an approach may be flawed when it comes to the complex interdependent and urgent challenges of the global sustainability goals. As a result, an increasing body of transformation literature suggests the need to collectively diagnose imbalanced interaction patterns in systems and how they lead to wicked problems. The practice of a joint diagnosis of the current reality may heighten an awareness of dysfunctional patterns among various actors in human systems. Such awareness could in turn strengthen the capability to actively engage with shifting behavior towards more functional patterns of interaction – between people and also between humans and the environment. Moreover, it is important to see ‘solved problems’ always as collectively found temporary solutions, hence regularly evaluating their contribution to a more functional overall and long-term pattern of aliveness is key.

The cognition of patterns as well as collective sense-making and collective co-creation methodologies will need to become standard competencies for stewarding sustainability transformations in large systems.

Stewarding nested transformation systems
Conceptualizing complex change as nested transformation systems may have a significantly empowering effect for multiple actors. For example, multiple actors in the renewable energy field create new connections and collaborations as soon as they realize that they are all part of a ‘change system’. The fourth mind-shift towards realizing collective stewardship task is therefore to move from taking an often-isolated project-based approach to stewarding systemic, patterned, and nested change initiatives as well as fostering interconnectedness and the relationship to a larger change system. This means recognizing the nested nature of issues and institutions in an overall complex system. Multiple actors in diverse places and institutions have varying interests and capabilities, and no single initiative or project can ‘solve’ a problem or address a challenge – because of its very embeddedness. This acknowledges the human agency: empowered people act differently when they see that they can influence future development. Large-scale transformations can therefore be seen as a result of different human, albeit loosely connected, collective actions at scale – probably at a scale that cannot be controlled or even coordinated.

Stewarding sustainability transformations means to move from taking an often-isolated project-based approach to stewarding systemic, patterned, and nested change initiatives as well as fostering interconnectedness and the relationship to a larger transformation system.

Find out more about how best to steward sustainability transformations  or read this Collective Leadership Study on Stewarding Systems Change.

Find out more on Collective Stewardship

and how to empower people to steward transformations collectively.

Click to read more
Other articles related to Collective Stewardship:
Fostering Commitment for Change is an Art One can learn

Collective action for sustainability must be guided by a leadership paradigm that is inspirational, fosters commitment by various actors and acknowledges the role of collective contributions to decision-making.

Donella Meadows’ article: Leverage Points – Places to Intervene in a System is an inspiring reminder, a timeless contribution that I believe needs to be unearthed again if we look at the state of the world, humankind’s many attempts and mediocre results to take us on the road to sustainability. This is an article that makes you think – and hopefully act. You will recognize how many aspects of sustainability initiatives are stuck in regulatory approaches that – according to her – are very low on the list of effectiveness of leverage points. The second highest effective leverage point, she suggests, is the power to create a paradigm shift.